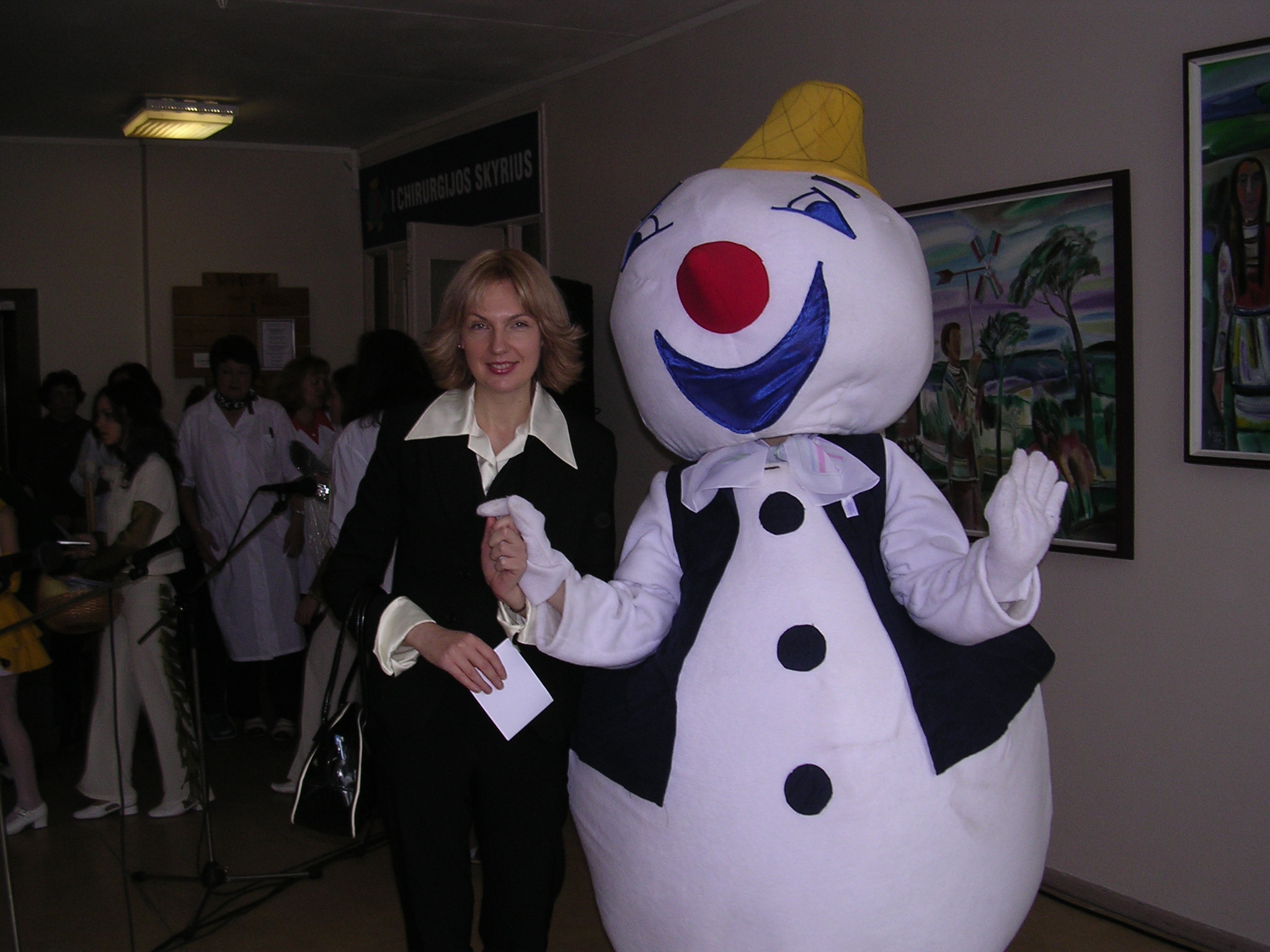 Year 2004. Presentation of book “Tirpuko Ledų šalis” [The Land of Tirpukas Ice-Cream] at Children’s Hospital at Vilnius Santariškės Clinic together with the A. Adamkienė Charity and Support Fund. 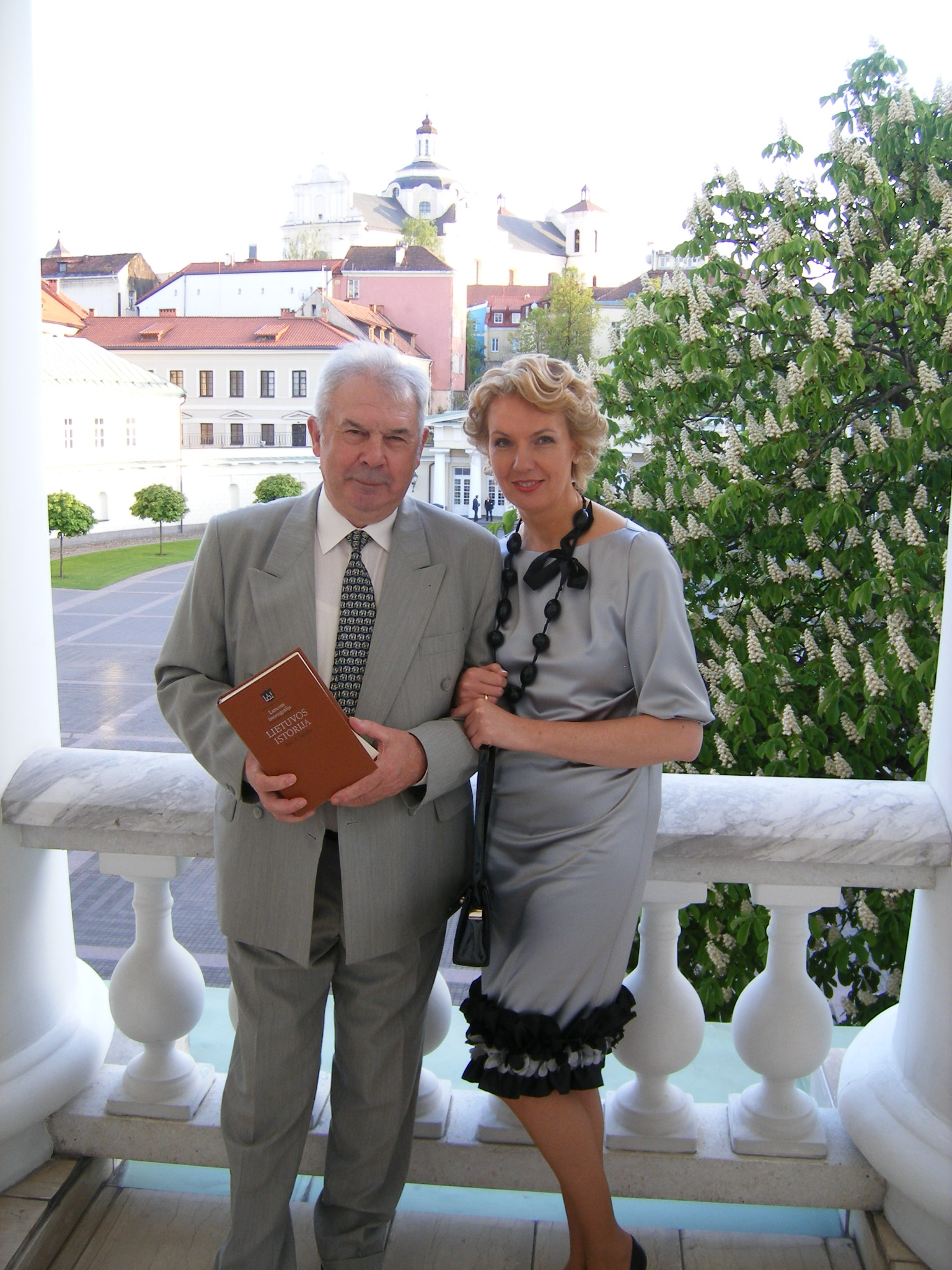 Year 2009. Presentation of the book “Su gerumu į ateitį” [With Kindness to the Future] dedicated to the A. Adamkienė Charity and Support Fund together with my dad J. Nekrošius at the Presidential Palace of the Republic of Lithuania. 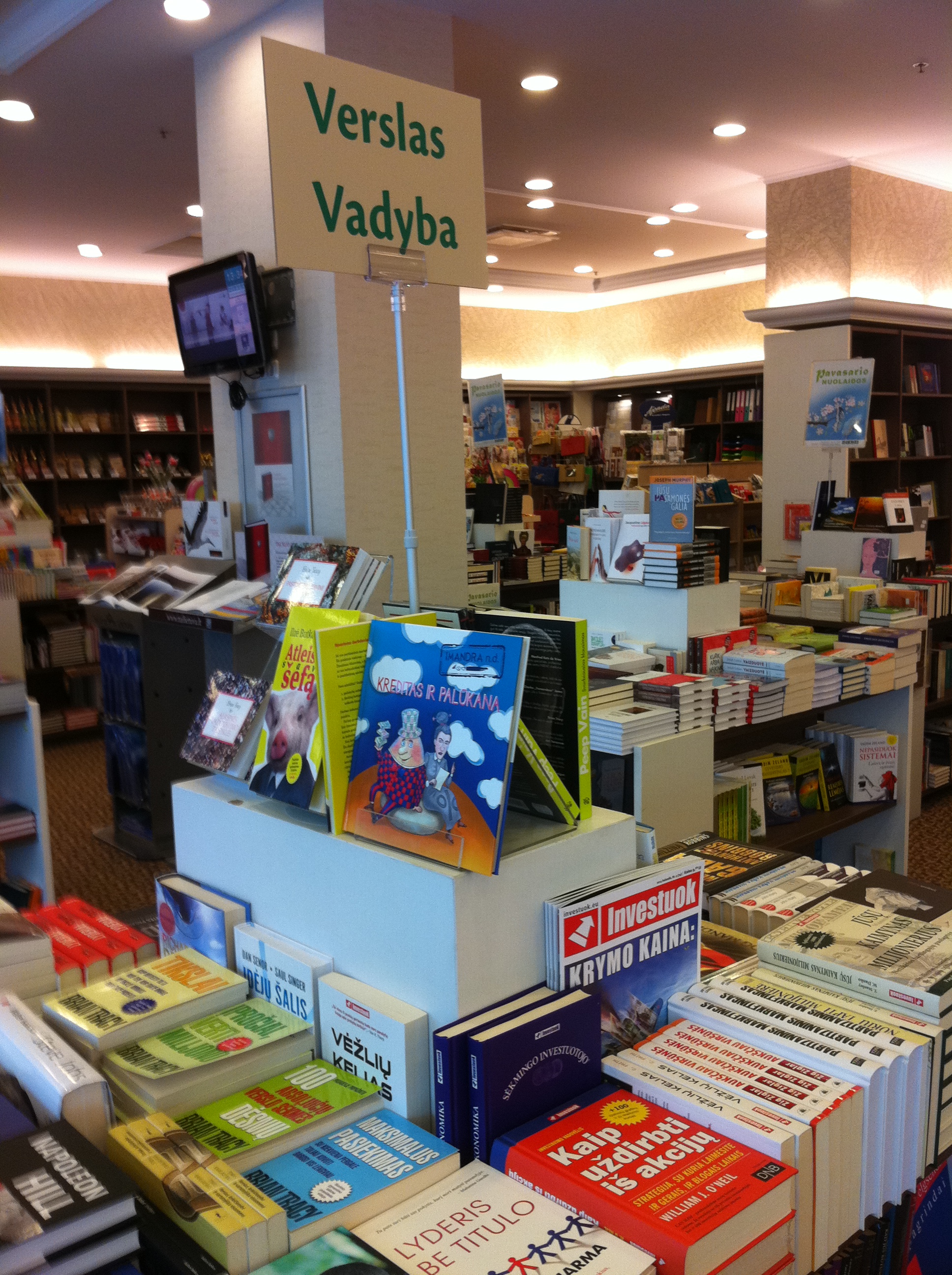 Year 2014. Educational fairy tale “Kreditas ir Palūkana” [Credit and Interest] at book shops in the country among publications in the field of business and management.

I have written my first piece of creative work by tapping the keys on my dad’s typewriter CONSUL with only one finger.

On 1 August 1963, on my birthday, I took a breath of hot summer air, opened my eyes and saw white hospital walls… After a year or two I tried to express this remarkable impression in writing: I hid behind a curtain at home and wrote some scribbles on a white wall… Of course, I found myself on the receiving end of some scolding – who could have ever thought that this was the beginning of my creative path…

First book – at the age of ten – it was typed on my dad’s typewriter and published at home at an edition of one copy. It definitely has a great value and it has been preserved to this day for over forty years now. It is much likely that it marked the start of the Blue Period in the timeline of my creative work because the cover of this book (four poems) was made of blue cardboard. This undoubtedly has made a great influence on my first book “Žydrojo lašelio kelionė į žemę” [Blue Droplet’s Trip to the Earth], which has already been published by a publishing house. This time 5000 copies were published.

As our family already had one poet (my dad Juozas Nekrošius), I managed to evaluate the competitive struggles early in my life so I honourably moved away from it by stepping in to the field of prose. And what could possibly be closer to prose than journalism? Here, at Vilnius University (1981-1986), it did not take long before I realised that “journalism was not science but a way of life”, so time flowed by like water: it seemed that “the time from July to autumn passed in a blink of an eye”! What is more, there had been some expressions of practical work in the field of journalism: articles in children’s magazines “Žvaigždutė” (1989 – 1990), “Genys” (1989), newspapers “Komjaunimo tiesa” (1981 – 1990), “Vakarinės naujienos” (1988 – 1989), “Lietuvos pionierius” (1975 – 1989), etc. Unforgettable summer creative practical trainings at the Lithuanian Radio and Television Committee as well as Kelmė “Komunistinis žodis” (1983), as a part of journalism studies, have proven that theory of journalism, according to J. V. Goethe, was “a dry branch, while the fruit-bearing tree of life was blooming”. I kept walking along the path covered with its flower petals: from an editor at children’s literature publishing house “Vyturys” to a spokesperson for the Lithuanian Agricultural Bank (currently DNB). My first financial educational book for children on bank, saving and children’s deposits as one of its services (“Monika ir Moneta” [Monika and Coin], 2001, 3000 copies) was born at this Bank.

As I outgrew my love for Monika after three years (after all, love lasts for three years), I wrote an educational fairy tale about ice-cream production “Tirpuko Ledų šalis” [The Land of Tirpukas Ice-Cream] (2004, order of UAB “Kraitenė” (3000 copies)).

I said goodbye to the Bank in 2003 and started building my own business: public relations company “Informacijos vadybos agentūra” [Information Management Agency] was established www.iva.lt. We had and still have many important and interesting integrated communication projects, but the creative ones fascinate me most of all. One of them is publishing literary – artistic magazine for children “Tipu Tapu” from 2009 up to present (www.tiputapu.lt).

In the swirl of work it is nice to reminisce the time when I had a chance to meet His Excellency President Valdas Adamkus and Lady Alma Adamkienė: I was the author and compiler of the publication for commemoration of the tenth anniversary of the A. Adamkienė Charity and Support Fund – “Su gerumu į ateitį” [With Kindness to the Future] (2009, 1000 copies). I have always believed that Kindness had wings, it spreads and multiplies: the more you give it away, the more of it comes back to you…

My creative path led me back to financial education of children. A fairy tale about responsible borrowing has stayed hidden on my computer for ten years, an offer for publication of a financial literacy fairy tale for children “Kreditas ir Palūkana” [Credit and Interest] has travelled around all banks in Lithuania and yet it saw the light of day only in 2013 (2000 copies, partner: UAB “4Finance”).

One year later, in cooperation with the Money Museum of the Bank of Lithuania, a new financial education fairy tale for children was born: “Monetų lobis, arba kaip atsirado pinigai” [Treasure of Coins, or where Money Came from] (2014, 1000 copies).

Many more topics about financial education are swirling in my head: about the history of paper banknotes and electronic money, about management of personal finances, financial wisdom on how to become a millionaire and not to lose spirituality, about ways to attract money and to seek financial success. And finally how to answer the question, if money can buy happiness?..

….While financial topics are still incubating in my mind, in 2015 the process of creative realisation has brought me to the world of pharmacy. Here a new educational fairy tale was born: “Provizorius Vilhelmas, arba “Gintarinei vaistinei” gera Jumis rūpintis” [Provizor Vilhelmas or “Gintarinė Vaistinė” Enjoys Taking Care of You] (1000 copies, order of UAB “Gintarinė vaistinė”).

However, the biggest, priceless, and the most fantastic creative project – my biggest and astonishing creative success – is my children: daughter Gabija (born in 1986), son Augustinas (born in 1991), daughter Austėja (born in 2004). Even they are “limited edition” – only one copy of each of them, because the order came from Above, I am very happy: it is God’s will and the best creative gift from God in my Life. 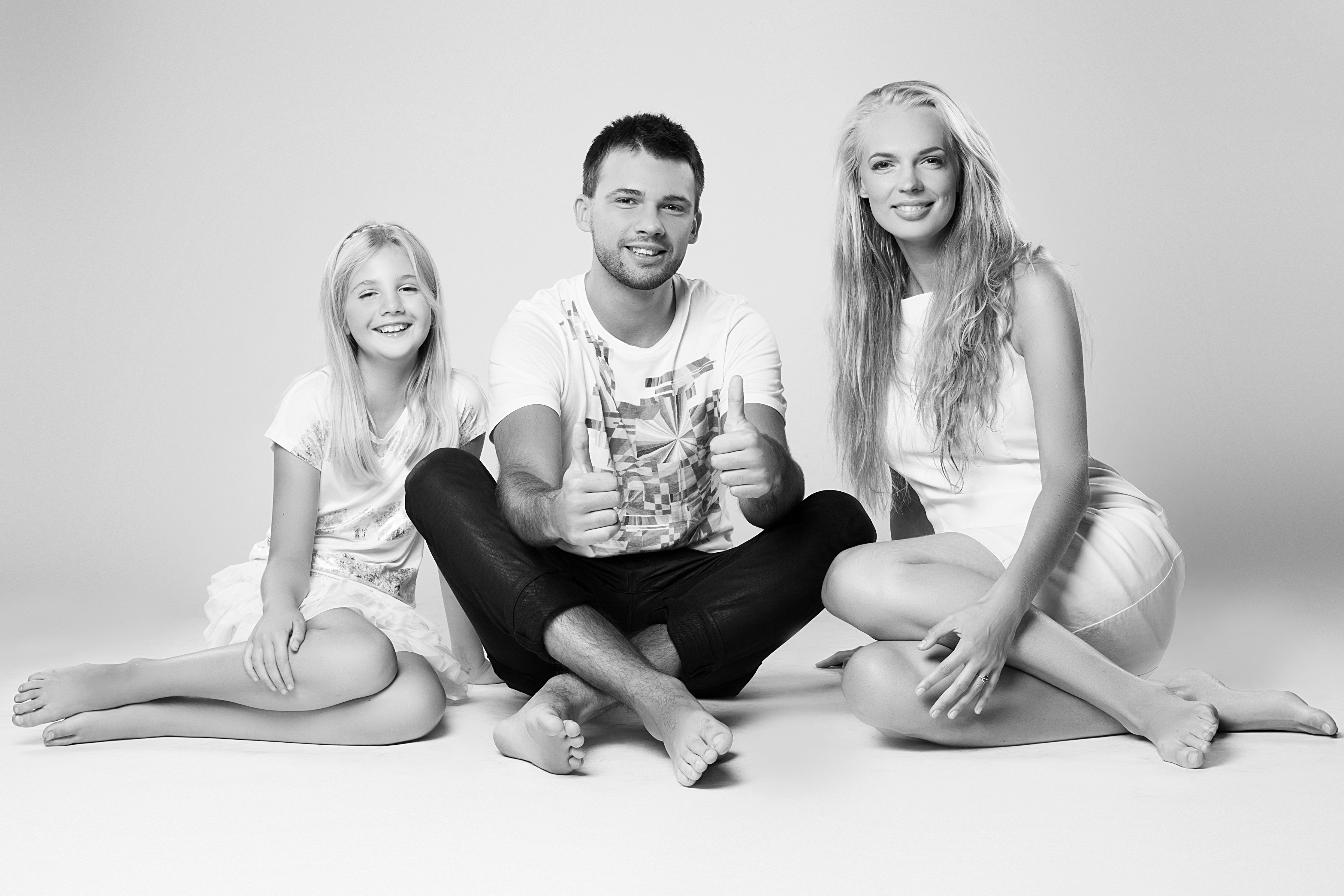 Year 2015. Happy children – the biggest joy and creative inspiration for their mother.